Beware the Wizard of Oz books advertised elsewhere online as first editions! Many of these books are not actually the original printings of these books. Often this is an innocent mistake on the part of the seller, stemming from the fact that copyright dates are the only dates given on most Oz books published right up to recent times.  As a result, people erroneously assume that the book is a first edition because only one date is given.

The most surefire way to determine the printing history of an Oz book is to use The Book Collector’s Guide to L. Frank Baum, a comprehensive reference. Another good guide is Bibliographia Oziana put out by the International Wizard of Oz Club. I have attempted to describe some general rules of thumb below for a brief online reference. Cautionary Note: In this review I use the term ‘first edition’ to mean the earliest version of a book–i.e., the first printing of that particular book by the original publisher. These are the ones most sought after by collectors. (See Bibliographia Oziana p. 12 for more information–it can be confusing!).

It is easier to determine what is NOT a first edition rather than what is. (Unfortunately, true first editions/first printings of most Oz books, especially the earliest ones, are somewhat unusual. Very few of the books in general family collections are true 1st editions.) For more information, see also my Youtube video interview here.

1) Most of the earliest Oz books by L Frank Baum were published by Reilly & Britton, which became Reilly & Lee in 1919. Check the publisher’s imprint on the spine or title page. Books with copyright dates before 1919, but published by Reilly & Lee, are actually later printings. The photo shows typical spine imprints for Reilly & Britton and Reilly & Lee. Reilly & Lee did publish first editions of some Oz books by other authors than Baum. See the list below for the original publishers of the first forty Oz books, by L. Frank Baum and subsequent authors. (Note: Unusual Canadian & British first editions not included.) 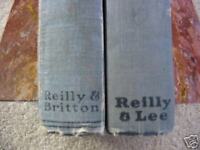 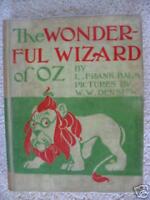 3) Most early Oz books were printed with color plates (inserted color illustrations) up until about 1935. Note that Oz books have a copyright date on the back of the title page, but not the actual printing date. So, if your Oz book has a pre-1936 copyright date, but has no color illustrations inside, it is a later printing. (The exception to this is the first edition/printing of The Road to Oz, which was printed on different colored pages and never had actual color illustrations. If your Road to Oz is printed on all-white paperstock, it is also a later printing).

Most first edition Oz books with color plates should have 12 of them (glued or “tipped” in along the inner margin). However, early printings of The Land of Oz, Dorothy & The Wizard of Oz, and the Emerald City of Oz had 16 color plates. Early printings of The Patchwork Girl of Oz and Ozma of Oz never had inserted color plates, but contain numerous full color illustrations. Conversely, just because your book has color plates doesn’t mean it’s a first edition. It just means it was printed before approximately 1935. Use the reference books given above, or take your book to a knowledgeable bookseller to tell for sure.

4) The so-called “white cover” Oz books, with bright white background cloth, were published mostly in the 1960’s and are not first editions! The photo below shows the different between an early version and 60’s white cover edition of The Magic of Oz. 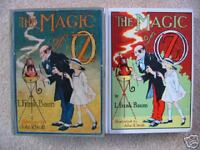 5) Does your Oz book have a dust jacket? If so, check the last Oz title listed on the flap against its publication date in the list below. If that listed book was first published AFTER the copyright date of your book, sorry! Your book has to be a later printing. Think about it.  Some books also have a list of Oz titles on the back of one of the front inside endpapers. Same principle applies for the most part.

Note: I don’t offer appraisals as it’s considered a conflict of interest to appraise items one might be interested in purchasing. You may be able to get a rough idea of your book’s value by looking for similar ones on Ebay–enter the title and check the filter box for SOLD listings (not ASKING prices, which can be much higher than selling prices). If you need a more formal written appraisal for tax or insurance purposes, you could try the American Society of Appraisers.